Our anniversary was on November 26th….

Wow. I can’t believe that it has already been one year. This might sound confusing, but this last year seems to have gone by so fast…but last November seems like forever ago.

I remember every little detail about out elopement road trip…and we will get to that in a moment. People say that the first year is the hardest. I would agree that our first year married has been more difficult than any of the years that we were dating, but absolutely nothing we couldn’t handle.

We talked and talked about what we wanted to do for our first anniversary (you only get one!) and we finally decided that after such a busy year we wanted to do something, just the two of us, and spend some time together.

No phones. No wifi. Just us.

That was C.J.’s idea, and I would never dream of complaining about such a wonderful wonderful suggestion! Just the two of us for three days! Perfection.

We will update everyone when we get back from our trip.

Our elopement road trip was a slice of heaven in pretty much every way. Sure, we had some obstacles along the way, but nothing was going to stop our happiness.

The first stop was Albuquerque. On the way there we stopped at a dinosaur museum…it was interesting.

When we woke up the next morning, everything was covered in about 4 inches of fresh snow. This is not super exciting to wake up to when you are on a road trip. We drove through the snow all the way through New Mexico and partially through Arizona…it was not super fun. 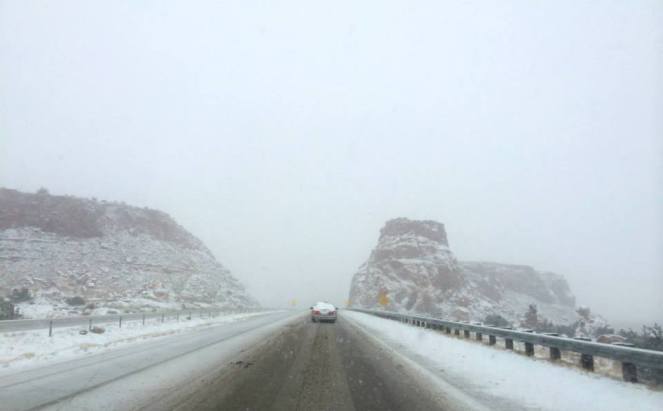 However…the scene went from dreadful and cold to breathtaking and warm all in the same day. 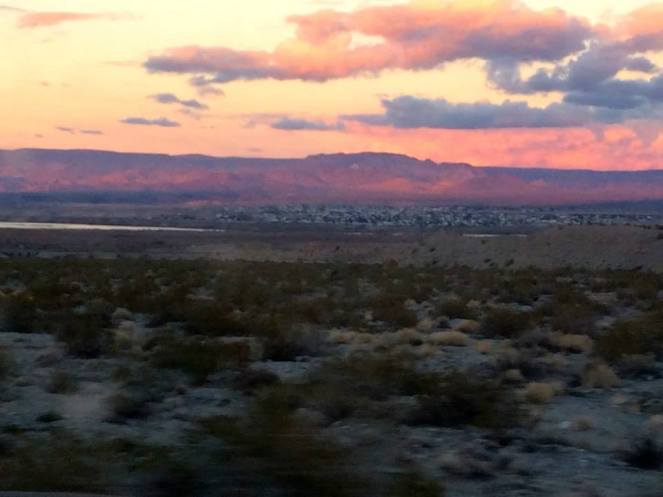 Along the way to Bakersfield for our second stop of the trip we detoured to a meteor site and stretched our legs. It was definitely a site to see! 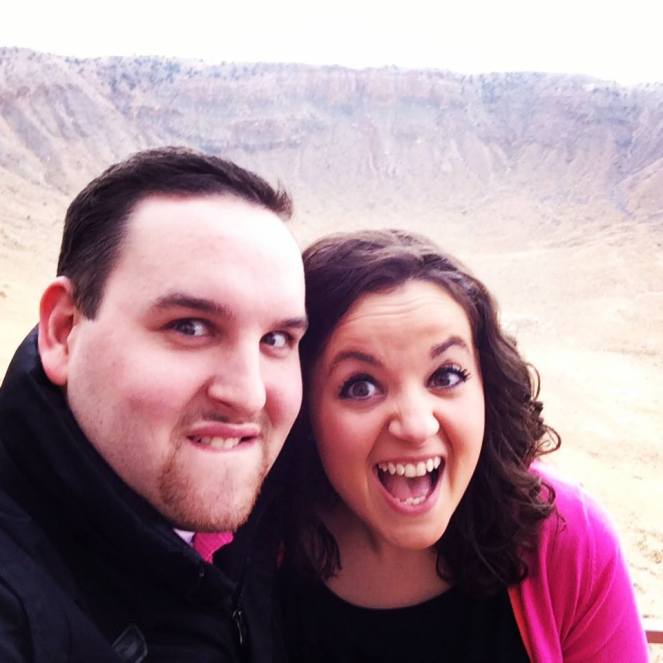 The next day consisted of the shortest drive of the whole trip. We drove up the coast and through some of the hill country of California. We were both very excited to get to San Francisco! We checked into our hotel and then went to get our marriage license. We also picked up a cake to celebrate with the next day. Dinner that evening was on a floating island restaurant near Pier 39. We were there when the sea lions were out and could hear them talking to each other throughout the evening. 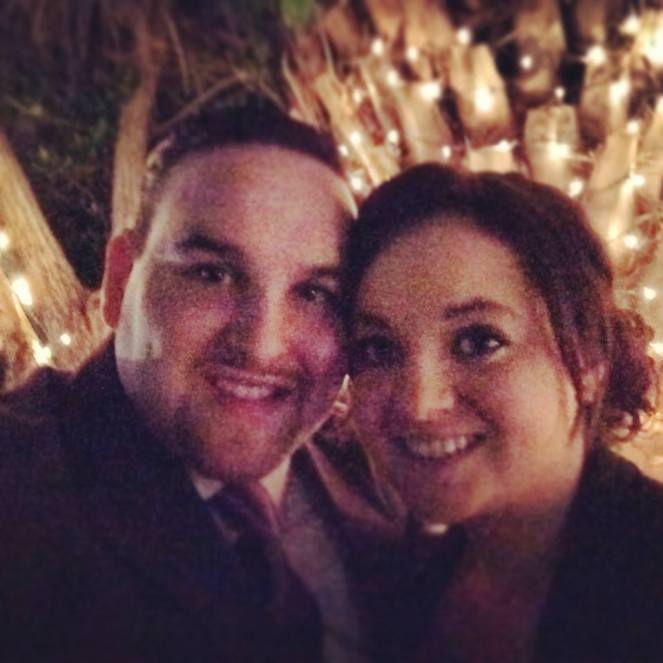 The view from the island was beautiful!

It was difficult to sleep that night and super easy to get up the next morning. I still remember the view from our hotel in Fisherman’s Wharf.

We wrote out our vows on their special paper and then started getting ready to leave for city hall.

We had laid out everything the night before, so getting ready didn’t take long at all.

With some extra time we continued the “selfie” trend of the trip with some wedding day selfies. 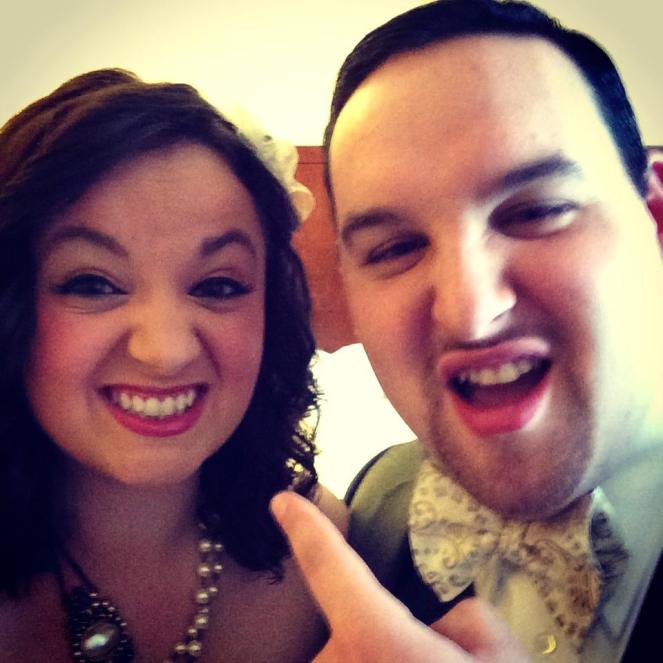 I still remember pretty much every minute that we spent in the breathtaking city hall building. It was everything that I had dreamed of…and more. What was unexpected about the day were all of the complete strangers that came up to us and told us how great we looked or congratulated us. It was such a fun day! One of my favorite random stranger comments happened while we were outside filming our video and someone yelled from their car “You guys look awesome!” 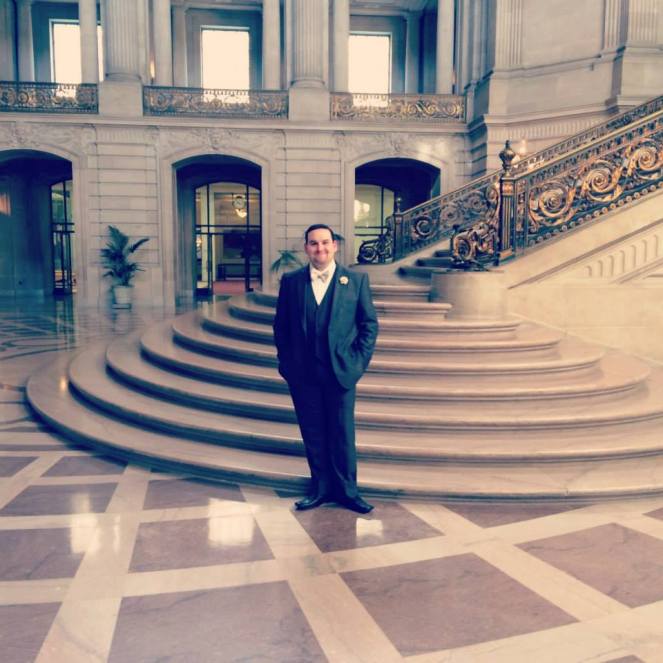 After the ceremony, which you can view here, we headed back to the hotel to change for lunch. We were going to the financial district and I did not want to be gallivanting around in my big white dress. We then went to Roy’s for lunch. It was amazing and they even gave us a special dessert for the big day.

Because our reservation was so late in the afternoon we were the only ones, other than the staff, in the restaurant….it was special.

We went back to the hotel and….took a nap. Yes, you read that correctly. We took the best afternoon nap ever. Most people who know me well know that naps tend to make me cranky…so I try to avoid them, but our wedding day nap was refreshing and needed.

After our nap we took a walk around some of Fisherman’s Wharf, before heading back to the hotel we stopped at the trusty neighborhood corner store (Walgreens) and picked up some fresh strawberries, forks, and plates.

Back at the hotel we decided to cut into our cake. We had decided on and ordered this cake months in advance and it lived up to what we expected. It was delicious and perfect and the worst thing about it was that we ended up leaving 1/2 of it at the hotel when we left. 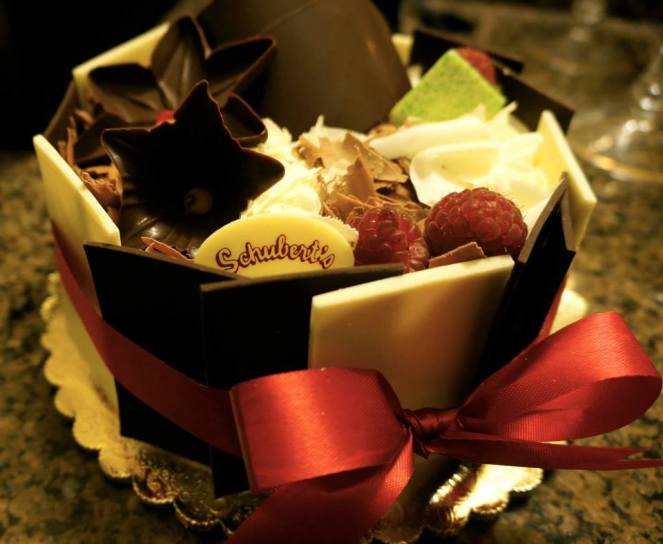 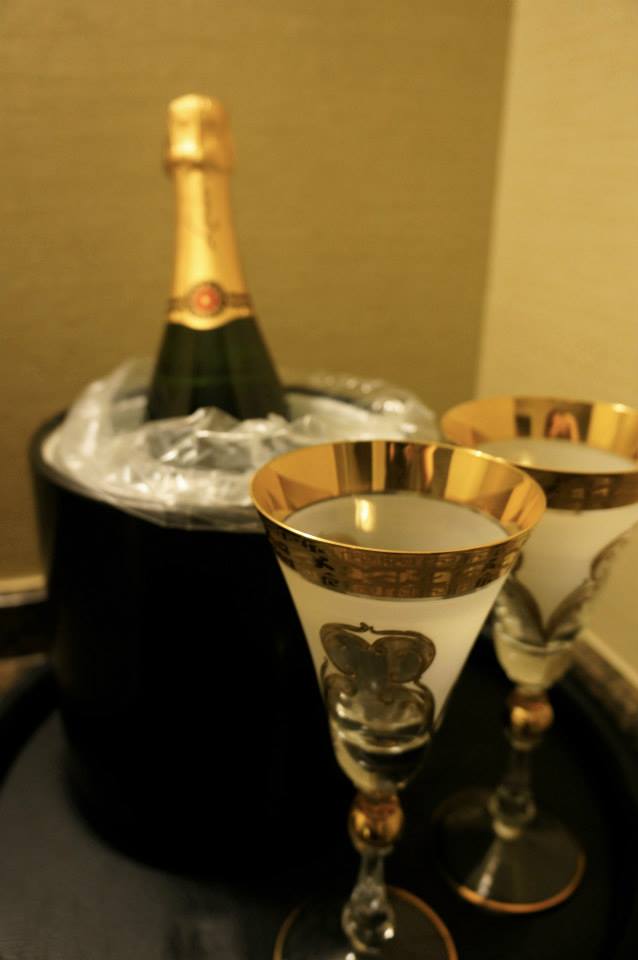 After cake we turned on a movie and then started a tradition that we plan to keep alive on each anniversary. We painted a picture together.

Being somewhat of a control freak I was a little nervous about how the painting would turn out, but it is one of my all time favorite paintings in the house. It was also a TON of fun. 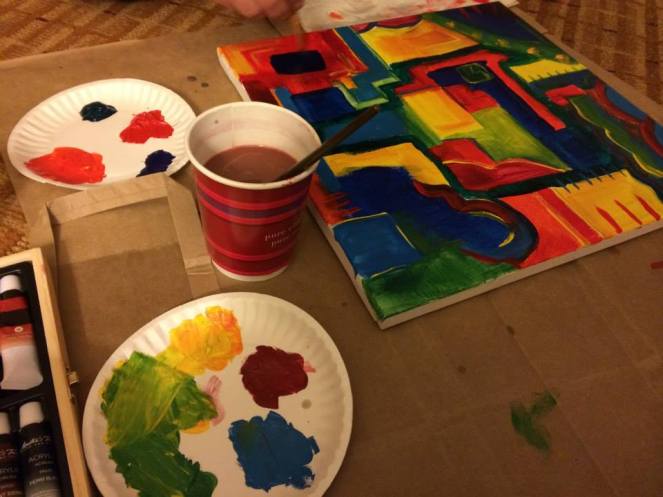 The next morning, we packed up our San Francisco room and headed out to site see for a few hours. We also decided to wear our matching Mr. & Mrs. Cavin fleeces for the first time.

We visited the Palace of Fine Arts…it was breathtaking.

We also hung out on the beach for a bit with a nice view of the city and the bridge.

C.J. basically had to bribe and pull me away from San Francisco…I LOVED it there. But…needing to stick to the schedule, we loaded up into the car for a drive to Las Vegas.

Making the departure better was our lunch stop…In and Out. Simple perfection.

I actually had the privilege of driving into Vegas (CJ did ALL of the driving in SF). Trying to find our hotel was easy, trying to maneuver around Las Vegas traffic and find our hotel’s parking lot…was terrifying. C.J. was very patient though and we obviously survived.

We stayed at New York New York and the view from our room was pretty awesome.

After getting settle into our hotel we headed out to get some dinner. We went to Gordon Ramsay’s Burgr. It was fantastic.

Honestly, I was not crazy about Las Vegas…to many people and it seemed rather sketchy. However, it had been a long drive, I was a little cranky from the chaos of the drive into the city, and crowds are not my favorite thing…so maybe possible we will visit Vegas again and I will appreciate it more.

No matter the environment, it was still a wonderful evening with my husband. 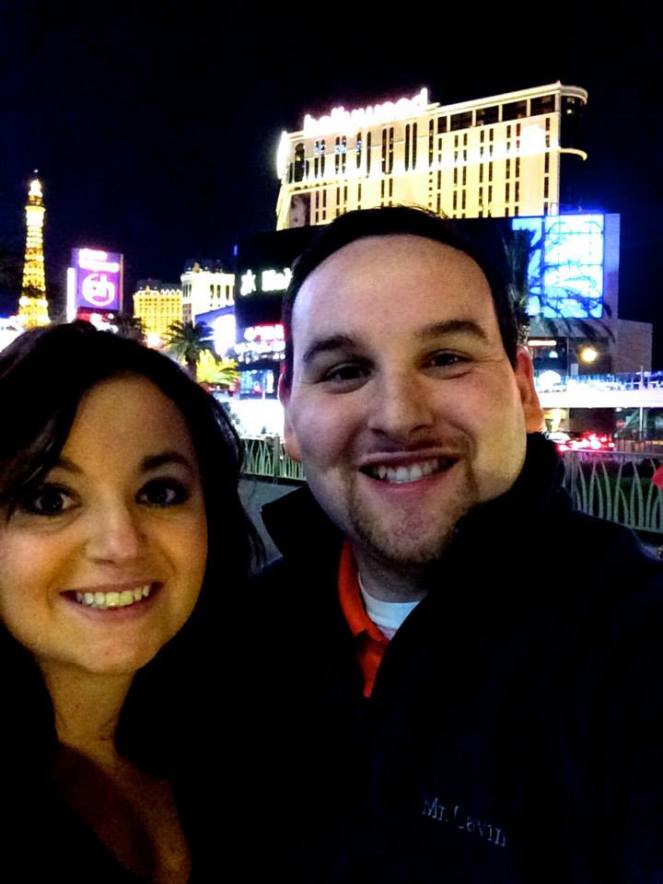 We left Vegas the next morning, Thanksgiving morning, and headed to Santa Fe. The drive was a variations of different landforms and because most of the snow had already melted, it was unlike our previous road trip through New Mexico. 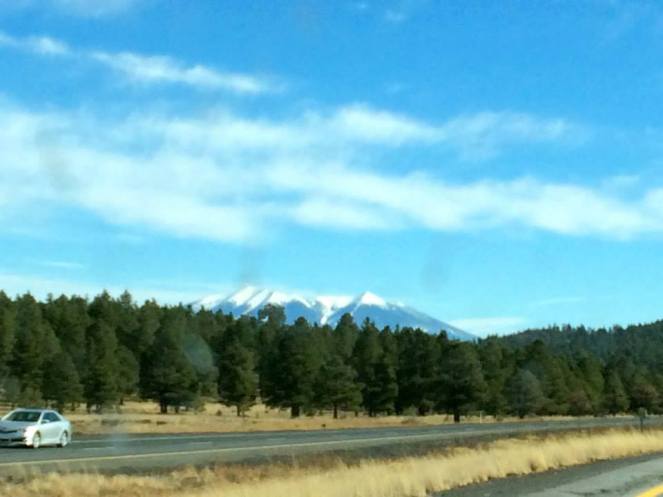 We got to Santa Fe with a few hours to spare before our dinner reservations. We chose a bed and breakfast for our night in Santa Fe and it was so much fun. We stayed in an adobe “cabin” with an authentic fireplace…which we learned later warms the walls of the cabin rather than the air.

Starting that fire took a lot of effort…and a few TV Guides. 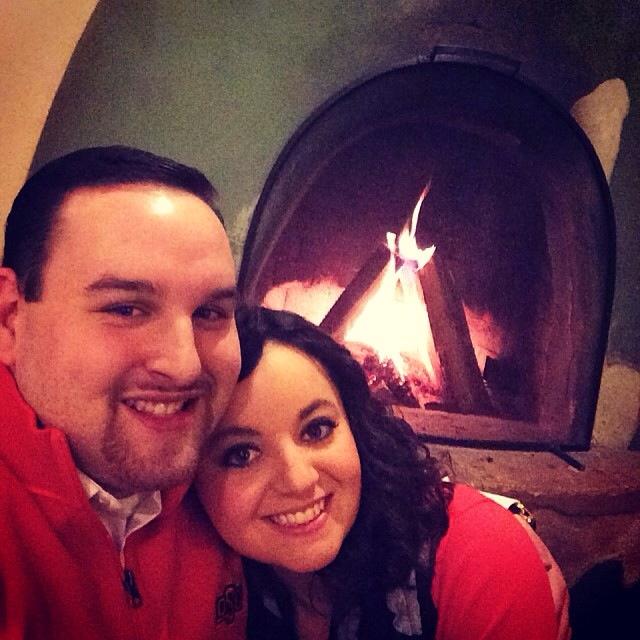 We enjoyed a lovely breakfast the next morning before we reluctantly hit the road to go home. I think we were both ready to be home…but the trip had been amazing and I was struggling to let it end.

C.J. remained positive and promised that just because we would sleep in Stillwater at home that night that our wedding road trip didn’t have to be over. He is the sweetest.

I do believe that after we unloaded the car, he went and picked up Eskimo Joes takeout for dinner. We had out first “date” at Joes…so it was a super sweet thing to do.

I found a keeper and I am beyond blessed to be Mrs. Cavin. This last year has been a series of wonderful times, trying times, and fantastic times…but at the end of the day we always have each other.

I love my husband more than ever and can’t wait to see what adventures we find ourselves in.

One year down…a lifetime to go.

And to finish this extremely long blog post…some of our favorite “wedding” pictures that we had taken on the OSU campus.

One thought on “One Year as Mrs. Cavin”